Prince Charles and Camilla laughed as they faced blustery weather after landing in Ottawa on their whirlwind trip to Canada.

The tour, which is the 19th the heir to the throne has undertaken to Canada, will see the Prince of Wales and the Duchess of Cornwall travel more than 2,000 miles from Newfoundland and Labrador to the Northwest Territories over three days this week.

But the couple faced a windy arrival when they landed in Ottawa yesterday, with Charles and Camilla clinging to the stairs of their plane as they descended the runway.

The Duchess also faced a battle with a scarf she had wrapped around her head, apparently in an effort to keep her hair tidy.

Members of the Royal Family embarked on tours across the 14 other kingdoms that have the Queen as head of state to mark the 96-year-old woman’s Platinum Jubilee as she remains in England at Windsor Castle. 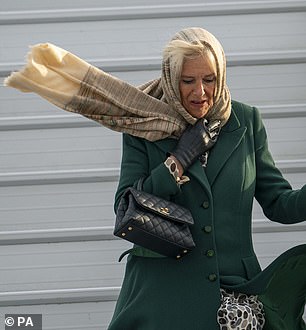 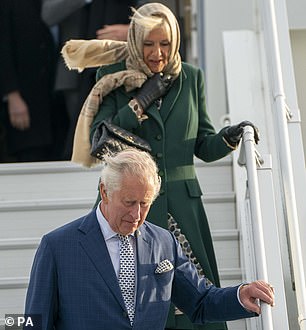 The Duchess faced a battle with a scarf she had wrapped around her head, apparently in an effort to keep her hair tidy (left and right)

In the snaps, Prince Charles can be seen dressed in a smart blue suit, walking past Camilla on the stairs of their plane.

Meanwhile, the Duchess wrapped herself in a forest green coat for the occasion, which she teamed with black leather gloves and long black boots.

The royal had swept her brown headscarf around her hair as she exited the plane, holding it neatly in place with one hand.

However, she seemed to see the funny side of the weather and could be seen smiling as she walked down the steps. 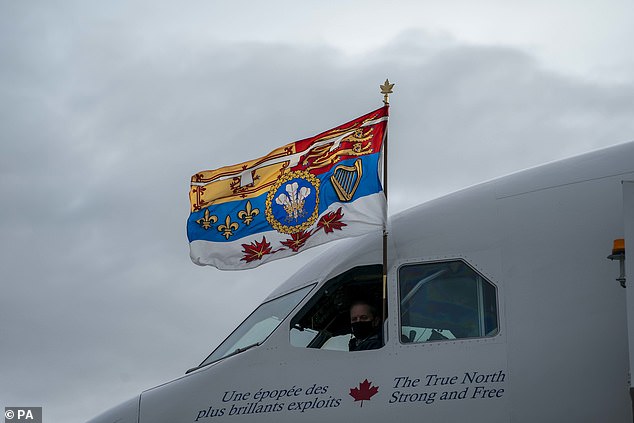 The tour will see the Prince of Wales and the Duchess travel more than 2,000 miles from Newfoundland and Labrador to the Northwest Territories over three days this week.

The couple’s appearance comes after Prince Charles said it was time to find new ways to ‘come to terms with the darkest and most difficult aspects of Canada’s past’ as he addressed reconciliation in his first speech on the royal tour.

Charles made the remarks during the official welcoming ceremony at the Confederation Building in St John’s, Newfoundland and Labrador – the first leg of his whirlwind three-day tour with Camilla marking the Platinum Jubilee of the Queen.

Prince Charles was asked to apologize for the treatment of Indigenous communities in Canada in the name of the monarchy as he and Camilla landed on Tuesday.

Cassidy Caron, president of the National Council of Métis People, said she intended to personally raise the issue with the heir to the throne when they meet on Wednesday. 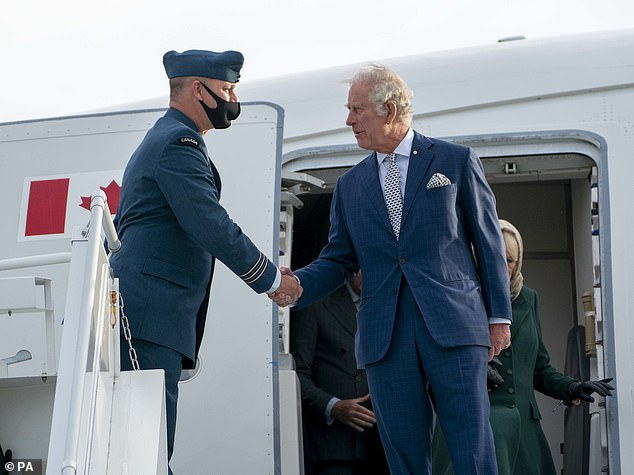 Prince Charles opted for a smart blue suit as he exited the plane at the airport yesterday, shaking hands with a member of staff on his arrival 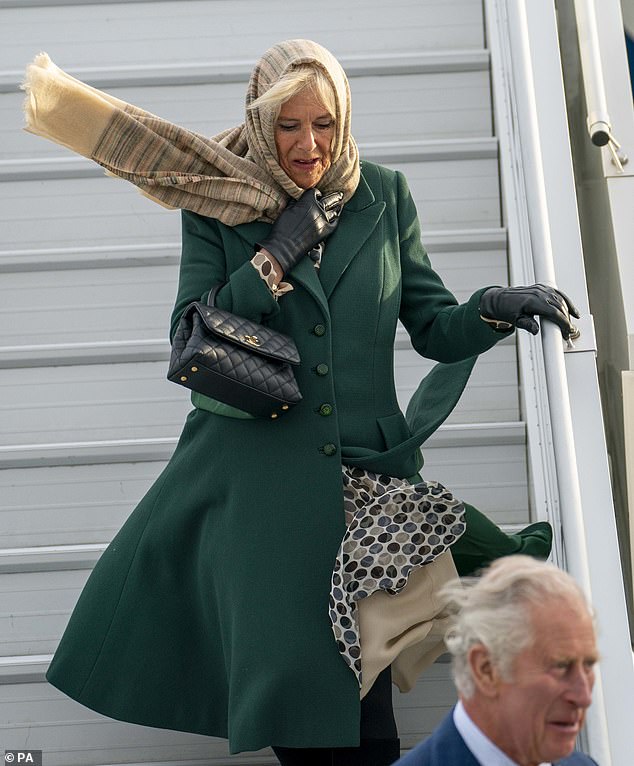 The couple faced a windy arrival when they landed in Ottowa, with Charles and Camilla clinging to the stairs of their plane as they descended the runway. 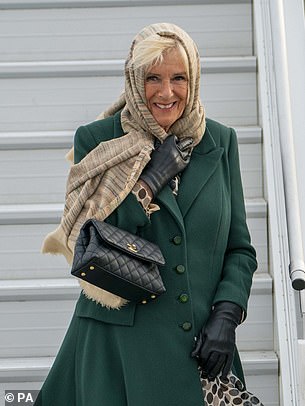 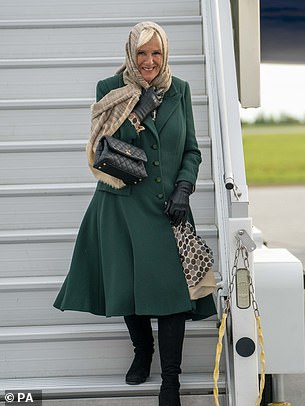 Meanwhile, the Duchess, who was in high spirits upon arrival, kept her hand on her neck as she secured her headscarf in place (left and right)

Mary Teegee, executive director of child and family services at Carrier Sekani Family Services in the province of British Columbia, said: “They also need to understand that they are not the leaders of our country,” adding that acknowledgment of the wrongdoings of colonization is needed rather than mere “banal” excuses.

The pressure comes after two recent royal visits to the Caribbean – by the Duke and Duchess of Cambridge and the Earl and Countess of Wessex – sparked criticism for promoting ‘colonialism’ and calls for reparations for the Britain’s role in the historic slave trade.

Delivering a speech in English and French, Charles made direct reference to the reconciliation process in Canada, speaking of “our collective need” to come to terms with “the darkest and most difficult aspects of the past.” 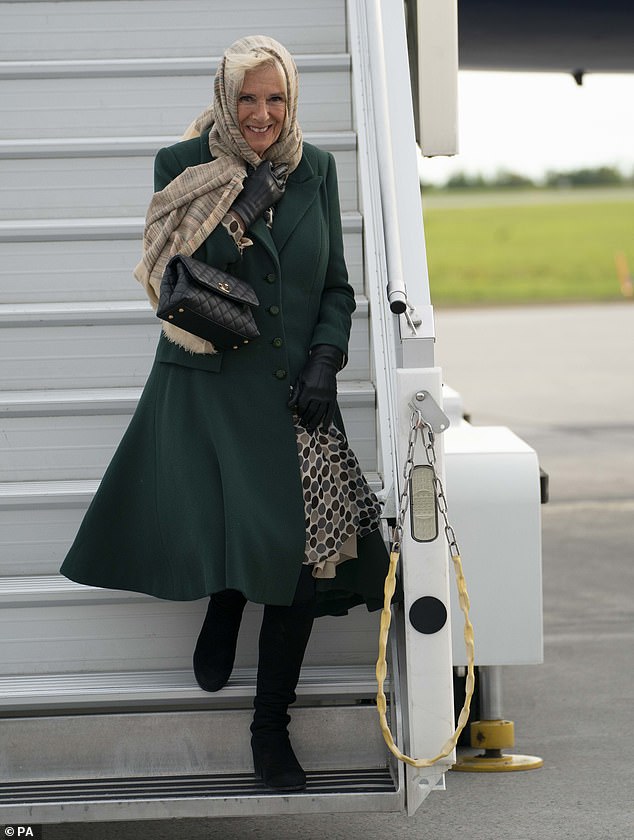 Arriving on a windy day in Ottawa, the Duchess of Cornwall appeared to be laughing out loud 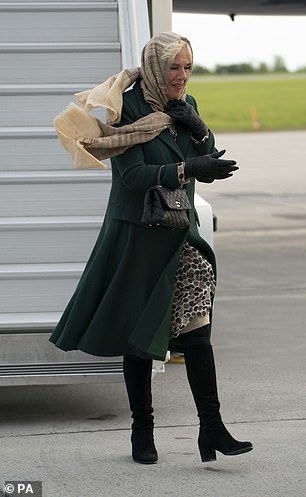 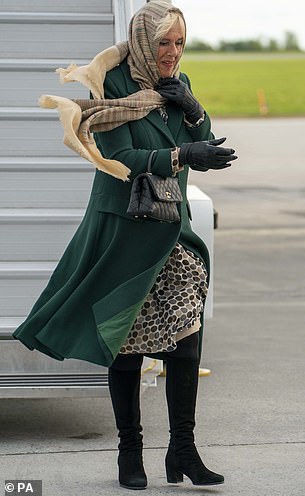 The royal opted for a sleek forest green coat for the outing, which she paired with black suede boots and matching leather gloves.

He said: “However, as we contemplate our collective future, as people sharing one planet, we must find new ways to come to terms with the darker and more difficult aspects of the past: to recognize, to reconcile and to strive to do better. It is a process that begins with listening.

He continued: “I very much appreciated the opportunity to discuss with the Governor General the vital process of reconciliation in this country – not a one-time act, of course, but an ongoing commitment to healing, respect and understanding.

“I know our visit here this week comes at an important time – with Indigenous and non-Indigenous peoples from across Canada committing to honestly and openly reflect on the past and forge a new relationship for the future. .”

He added that he and his wife “look forward to hearing from you and learning more about the future you are working to build.” ‘ 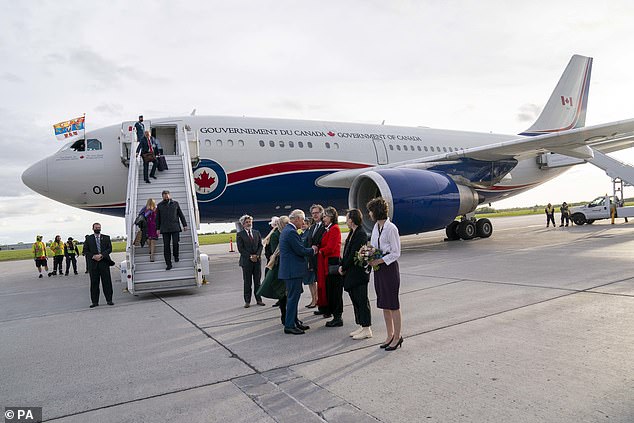 The couple’s appearance comes after Prince Charles said it was time to find new ways to ‘come to terms with the darker and more difficult aspects of Canada’s past’ as he addressed reconciliation in his first speech during the royal tour.

“As so often in the history of this country and its people, Canadians have embarked on an adventure that requires commitment and courage. My wife and I could hardly be more privileged to travel part of this journey with you and we are deeply grateful for your warm welcome, which we will carry with us throughout this tour.

The UK enjoys a warm relationship with Canada, where the Queen is head of state, and whose three-day Charles and Camilla Platinum Jubilee visit is designed to celebrate.

But the country has accepted the grim discovery last year of hundreds of human remains in unmarked graves in former church-run schools, institutions where indigenous children were forcibly moved for generations.

From the 19th century until the 1970s, more than 150,000 Aboriginal children were forced to attend publicly funded Christian residential schools in an effort to assimilate them into Canadian society.

Thousands of children died of disease and other causes, and many never returned to their families.

The Canadian government has recognized that physical and sexual abuse is rampant in schools, with students being beaten for speaking their native language.

Mob stones mentally ill Pakistani man to death Published on: Monday February 14, 2022 By:AFP Text size: People light candles in front of the portrait of a Sri Lankan man who was lynched by a mob over blasphemy allegations in December. Photograph: Nadeem Khawar/EPA ISLAMABAD: An angry mob stoned a mentally ill man to death […]

The Internet ARC is long, but it bends to an ultra-niche specialization. Now, alongside Tesla, SpaceX and a bloated messianic-libertarian complex owned by Elon Musk, is a fiery corner of Twitter dedicated to tracking the exploits and contributions of a jaw-dropping selection of footballers in real time. Irish. Many Irish football fans – as well […]

Joanne Christine Cook Wilson went to join her Heavenly Father on Tuesday, May 3, 2022, after a short illness. She was at home surrounded by her husband and daughter when she died. She and her husband had recently celebrated their 60th wedding anniversary. There was a bond built on faith in Christ, understanding that time […]