Almost 1 in 5 people in the United States today are Latinos, and “the Latino vote” has attracted important news coverage as their political voice grows stronger. However, considering every 62 million Latinos as a group is not necessarily very helpful in understanding voting attitudes or habits, as some scholars and journalists have underlined.

These aspects of Latino identity are only now beginning to be recognized more clearly in media reports. Still, they’re as informative as gender, race and other characteristics for understanding Latino voters — and will likely come into play when Americans head to the polls in November.

Historically, Latinos in the United States are predominantly Catholic, but the numbers have recently changed. In 2020, the Public Religion Research Institute reported that 50% of Latinos call themselves Catholic, 14% are evangelical protestant, 10% non-evangelical Protestants and 19% without religious affiliation. Some researchers estimated that by 2030, half of Latinos in America will identify as Protestant.

Indeed, the voting preferences of Latino groups can be better understood by looking at religious affiliation, not ethnicity. Sociologist Gerardo Martifor example, showed that Latinos who identify as evangelical Protestants are more likely than other Latinos to embrace Christian nationalist ideas. This ideology promotes the idea that the United States has a special relationship with God and should be governed by Christian principles. Marti also shows that evangelical Latinos are more likely to align themselves with white evangelicals by favoring policies that maintain political dominance of white Americans.

Protestant Latinos are also more likely than other Latinos to hold anti-immigrant sentiments, which follow the attitudes of non-Latino white evangelicals. This may seem counterintuitive, since Latinos have been subjected to racist stereotypes and often have ties to immigrant communities. However, the attitudes of immigrant groups towards newcomers changes over timeespecially if these groups begin to access the privileges associated with whiteness.

The media began to pay more attention to latin diversity, especially in the wake of the 2020 presidential election, but tends to focus on states like Florida, California, and Texas. Regions with smaller but growing Latino communities are understudied, especially in the Midwest — home to five of the 13 Battleground States in 2020.

Compare by Census areasthe Latino population of the Midwest increased by 28% between 2010 and 2020: the second highest rate of all regions, only 2 points less than in the South. The Midwest also has youngest Latino populationwith a median age 26.7 years old. Because there is a significant association between age and political opinion, and because young Latinos are more likely to be US citizens and therefore able to vote, this could become a factor in the future.

The intersection of religious and political affiliation among Latinos in the United States also appears to vary by geography. Considering geography and religion together helps highlight the diversity among Latino voters.

Based on our analysis of Pew Research Center polling data Wave 86 American Trends Panel, Latino Protestants in the Midwest are more likely to identify as Democrats or Democratic-leaning than in other regions: about 74%, compared to about 63% in the Northeast and 52% in the West and South. Meanwhile, 86% of Latino Catholics in the Northeast identify with the Democratic Party – but only 66% in the South.

Among non-religious Latinos, 65% in the Midwest identify with Democrats, lower than any other region. These differences are intriguing, but since Pew only surveyed 207 Latinos in this region, representing only 6.1% of the total sample, it’s difficult to draw statistically-based conclusions – another reason to pursue further research. research in the Midwest.

The problem with understanding the “Latino vote” is that there really is no such thing. Latino communities have always been diverse and growing even more. Who is the most eligible candidate? the one you love 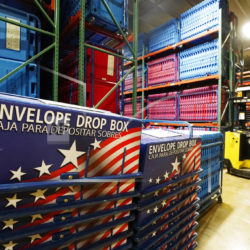 RELIGION: “Thou shalt not kill”

In the fall of 2021 — after more than a year of the pandemic and following a contentious presidential election — former pastor Eric Atcheson was standing in line on a Saturday morning when he realized he had to change his life. “I had gone out to get my wife and daughter cookies for breakfast. […]

We need respect for religion

As an atheist among the religious, I’m sick of the lack of respect. “I still hold you before God everyday.” This is a quote from a birthday card my sister received. I also received similar quotes from family members. Although the words on the cards are meant to be kind, I’m really tired of hearing […]