The Bible Baptist Church has offered a second ministry experience every Sunday morning for the past 24 years.

For many of those who participate, it is the first time in their lives that a church has engaged them.

Michelle Campbell, who became deaf at age 2, said she and her deaf sister grew up in a hearing family and there was no interpreter when they went to church. Sign language “wasn’t a big thing” in their family, she added.

She gathered surface information, but did not have a full religious experience until she attended the Bible Baptist Church’s deaf church service in 2001.

“It’s like being in a dark room and you’re just sitting there; nothing really happens,” Campbell said. “When I came here and they explained Jesus, they explained how he died on the cross and I finally understood perfectly, ‘Oh, he did that for me.'”

“And it’s like there’s a light on in the room,” she continued. “I could finally see that there was something that could bring me home instead of just tripping.”

Pastor Randy Dignan was elected pastor of the Bible Baptist Church in 1998 when he was 22 years old. He launched the church’s deaf ministry at his first Sunday service.

Dignan’s parents, sister and grandparents are deaf. There are five generations of his family who are deaf, he explained.

This week’s Sunday School lesson, taught in sign language, was “How to Know God’s Will” and covered passages from Hebrews, Matthew, Thessalonians and Corinthians.

The lively but silent chatter died away as the lesson began, making the faint sound of music upstairs the only sound in the room.

Instructor Chad Bogue, who is deaf, enjoyed wide participation as he led the dozen live attendees on what to read in their Bibles. After a while of absorbing the passages, the conversations were quick to break out.

Bogue and other members of the Congregation for the Deaf discussed their thoughts with the News Tribune through one of the church’s five American Sign Language interpreters. Bogue said his biggest challenge is trying to make sure everyone understands what he teaches.

Some Deaf people only know one style of signing or may not have extensive knowledge of signing, while others may have a lifetime of experience, he explained. Communicating with these differences becomes more complicated as he tries to interpret the Old English of the Bible and convey it to a deaf audience who may already have difficulty understanding the signs intended to communicate Modern English.

In many ways, Bogue said, he’s like a performer.

Bogue said it can be difficult to get people to reflect on and evaluate their spiritual life, and how that plays into how they approach issues.

“It can be difficult trying to figure out where their head is and how to make it clear to them,” he said.

With so few churches offering full services for the deaf, the commute can also be a challenge, said Bogue, who travels from Auxvasse.

“Really, it’s very difficult trying to get people to show up,” he said. “So it is difficult to develop the ministry in this way.”

To address this, the church has created online streams and is running a shuttle bus to allow members of the congregation for the deaf to enter. In addition to the 12 people in class, there were a few online watching the Sunday School lesson via a live stream.

Cambell said deaf ministry at Bible Baptist is a unique experience because few churches have prioritized services for the deaf. Those who tend to be “inconvenient” because they use an uncertified or inexperienced interpreter, she said.

“Coming to church really helps a lot of deaf people feel like they belong,” she continued. “If it wasn’t for salvation and not for him teaching us that Jesus leads us to salvation, I don’t know where I would be now.”

Dignan said few other churches in the area provide services for the deaf.

“The Deaf are the #1 underachieved group of people in America,” he said. “They’re just kind of a forgotten culture.”

The Sunday Deaf Service is structured like any other church service, but there is often no music and prayer does not involve bowing your head or closing your eyes.

Dignan signs and provides written materials to the deaf congregation when he preaches.

“They are very direct, very open and very frank,” he said. “In audience services, usually the man stands up to preach and the crowd sits there and listens. … Deaf people will raise their hands and interrupt you to ask a question in the middle of the service. That’s very common. They’re very laid back.”

At one point during Sunday’s roughly 25-minute deaf service centered on Thomas and Didymus, the conversation morphed into how best to sign “Native American.”

Since joining the church two decades ago, Campbell said she has made more deaf friends and learned from them.

Campbell, who comes from Fulton with her husband and three deaf children, said she learned a lot from Dignan’s preaching and credits him for helping her grow in her faith.

Juanita Ballance, a member of the Congregation of the Deaf for three years, said she enjoys going to church because of the opportunities it provides.

Ballance said she grew up Catholic and was “saved about three years ago” when Dignan’s mother-in-law brought her into the fold of Bible Baptist. She was baptized last year.

“I really like this church,” she said. “It gives me camaraderie.”

The Bible Baptist Church has more than 300 people who attend regularly, Dignan said, of whom about 30 to 40 are deaf. The population is about 10 percent of the church congregation.

Deaf people make up about 3.6% of the US population, according to the 2011 American Community Survey.

Dignan said he wanted the ministry to remind people that hearing people should not be afraid of the deaf, but embrace them.

“I think it’s best to try to make sure cultures embrace cultures,” Dignan said of the importance of reaching out to the deaf community.

“They want people to learn about their culture. They have nothing to hide, you know,” he continued. “They are the happiest, friendliest, most positive people on the planet if you give them the chance to prove themselves.”

One of the things Dignan said he is most proud of is the church’s ability to reach multiple generations of deaf families.

When he started deaf ministry, Dignan said he reached three out of four deaf couples, who then began to attend and bring their children.

“We have deaf children who come from deaf people that we reached maybe 15 to 20 years ago, and I married them,” he said. “So that’s really neat.”

Dignan having the ability to sign off is important, Campbell explained, because it means he can communicate more clearly what he means and his deaf congregation can ask individual questions.

Caleb Frazier started attending church about a year ago at the suggestion of his wife, Amanda.

Caleb said Dignan’s signature abilities taught him a lot about religion and allowed him to pursue additional reading outside of the church.

“I really feel like I’ve grown over the last year because of that,” he said.

Amanda has been attending Bible Baptist for more than four years and said Dignan’s support of the deaf community is refreshing.

She said she appreciates the way Dignan approaches the deaf community and how he explains religion so clearly. She said it makes her eager to know more.

“He really encourages us to grow and come to church more so we can grow,” Amanda said.

Brandon McNamer of Fulton joined Deaf Ministry in 1998 while in high school. He said he wanted to know more about Jesus and was looking for a place to do so.

McNamer said he was also struck by Randy’s signing and quickly decided he had found a home.

“I grew up with hearing parents – I was the only deaf in my family,” he said. “So it was great to find a place for me to grow up with other deaf people where I could have access to communication and what’s going on.”

Photo by Ryan Pivony/News Tribune: Chad Bogue leads weekly Sunday School for the Deaf at Bible Baptist Church. Bogue, who comes from Auxvasse, said transportation and understanding can be the biggest challenges in leading classes. 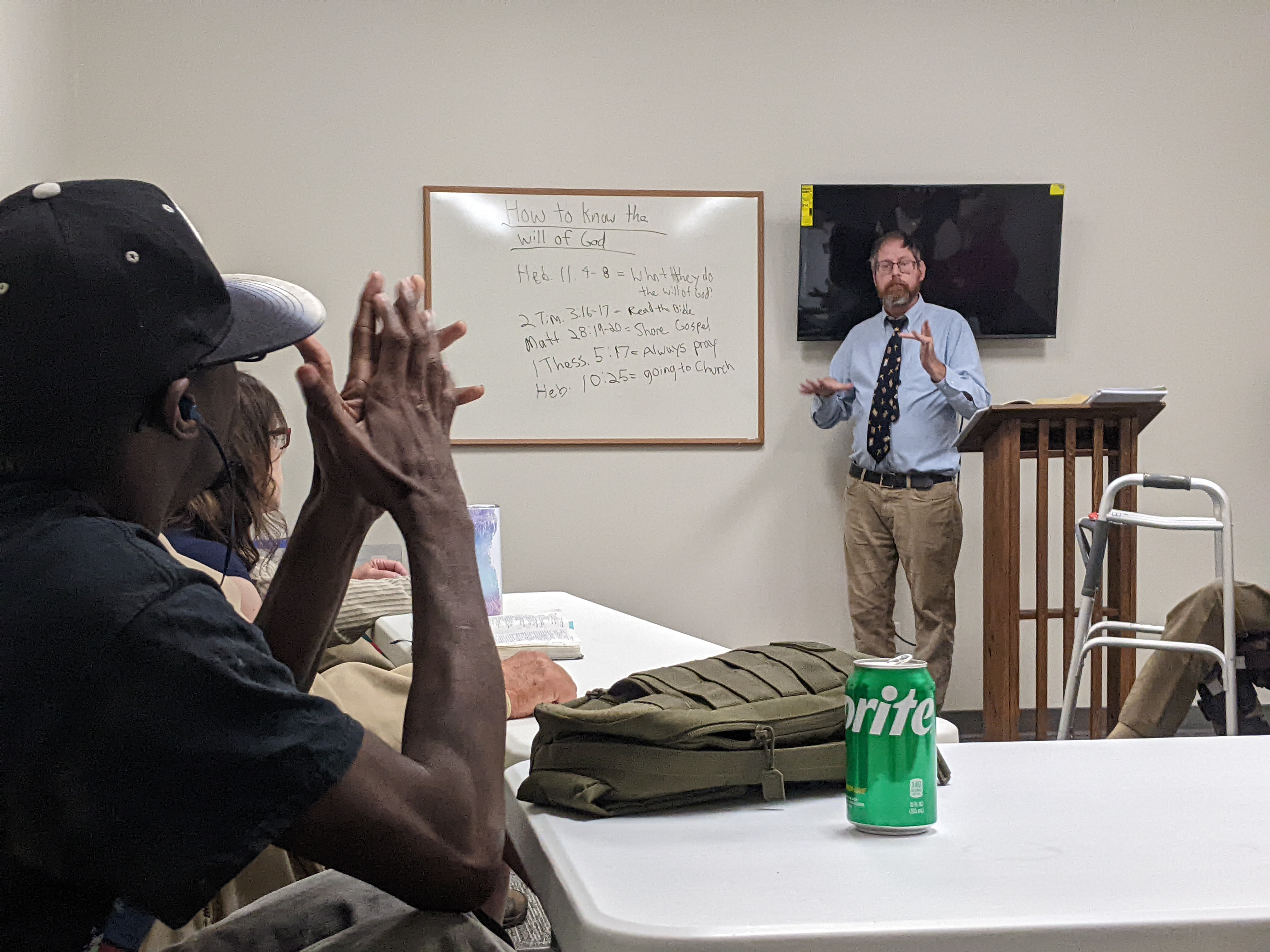 Photo by Ryan Pivony/News Tribune: Sunday School teacher Chad Bogue, who is deaf, discussed knowing God’s will with about a dozen other deaf members of the congregation on Sunday 23 October 2022, at Bible Baptist Church. The group communicates through American Sign Language, which is also used to offer a weekly church service for the deaf.

Religion: We Are Better Than That – Morgan Hill Times

My great-grandfather was a bishop in a small Christian denomination who started preaching on street corners. Crowds gathered to hear his message of God’s love. Eventually, he founded a church in Dayton, Ohio’s poorest district, conducting standing-room-only services. I look up to my great-grandfather, but I’m an Episcopal priest and we don’t usually preach on […]

During the municipal primary election in February, several voters at the polls said they informed their decision that they used Vote Saint Joe – a conservative-leaning religious website designed specifically for this year’s election. Its creator, Josh Blevins, is the senior pastor of Grace Calvary Chapel. He said he couldn’t find enough information about the […]

By Marnita Coleman, Special to AFRO, mcoleman@afro.com Staggering statistics reveal a disparity in heart health in the African American community. While heart disease is the leading cause of death in America, the hospitalization of heart failure is twice as likely among blacks, but the table is turning. The Jackson Heart Study, a 20-year research project […]